Catching the eyes of anyone paying attention, Tomas Morales stands proudly at the front of a room full of athletes testing for their next belt rank at Victory Martial Arts (VMA) in Ocoee. Seemingly random sounds loudly emerge from his lips until his sister Maria steps up and puts a stop to it.

Catching the eyes of anyone paying attention, Tomas Morales stands proudly at the front of a room full of athletes testing for their next belt rank at Victory Martial Arts (VMA) in Ocoee. Seemingly random sounds loudly emerge from his lips until his sister Maria steps up and puts a stop to it.

Tomas is unlike most others who have earned the rank of black belt. Along with having Down syndrome, Tomas also experienced two respiratory arrests at birth that had doctors predicting he would live only an hour. Today, he’s 21 years old and well on his way to earning his second-degree black belt in Taekwondo. 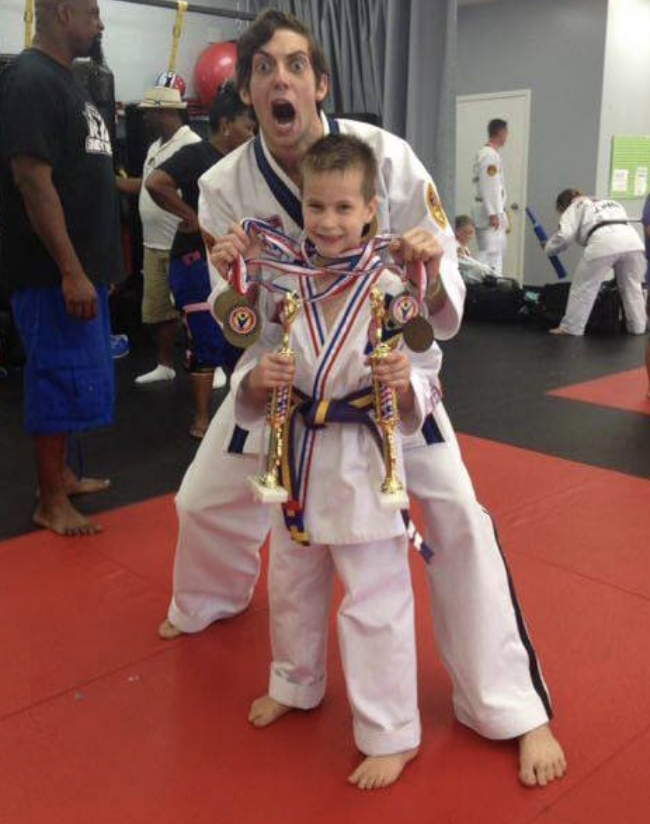 Seeking a final kid activity they could do together, Maria, 24, found VMA. “Tomas and I have always been like best friends, and we enjoy doing lots of things together,” she says. “I wasn’t sure how Tomas would do but eventually decided, ‘What the heck, let’s try it and see what happens.’”

Four years later, Maria credits the amazing team at VMA for Tomas’ increase in focus and confidence. The school’s positivity, coupled with tangible signs of progress through stripes and belts, motivate him. He’s always excited to go to lessons, tests and tournaments. Mostly, he loves showing off his pictures and videos of accomplishing a new move or board break.

Although he is capable of executing the moves, Tomas struggles with ascertaining new skills. Dedicated to his success, the team members at VMA became innovative in their instruction, breaking moves down and offering incredible patience, removing many boundaries for Tomas. Though he’s nonverbal, it’s clear he especially loves going to lessons with Mr. Verneau, who has worked with him to run, jump and work parts of his motor system that even Maria didn’t think would happen. She even tells of videos where Tomas nails a move and Mr. Verneau is in the background cheering him on.

Taekwondo may not be considered a team sport, but Maria may argue differently. Instructors, Mr. DiDio, Mr. Valecillos and Mr. Iosua offer constant motivation while Mrs. DiDio diligently finds gear and a properly fitting uniform and ensures he’s registered for what he needs, leaving only the anxiety of butterflies for the actual event to grapple.

Maria, also a black belt, tends to be the person who Tomas follows in class. “At the beginning and probably to this day, I catch myself looking at him to see if he’s following in the form,” she says. “The instructors catch me, too, and, often, the process of growth for both of us involves me learning to let go and let him do his own thing.”

School officials shared that Maria, who aspires to be an attorney, is so committed to her younger brother that she’s even contributed financially to his Taekwondo training. She gets great joy in seeing his face when he achieves a difficult board break and loves watching him compete. “When he’s on his own in front of a panel of judges and does well, you can see how proud he is of himself,” she says. “I can’t help but smile and get a little emotional because I know how hard he worked to get there.”

In fact, Tomas took first place in a recent competition.

Candidly, seeing a person with Down syndrome in a black belt at Taekwondo causes lots of looks. Tomas’ strength and awareness motivates him to simply say “hi” and move on with his training. “I think his inclusion in everything has made all of us better,” Maria says. “It takes us past that point of seeing that he’s different to he’s also just another student. He goes to spar and does board breaks with the guys just like the rest of them.”

VMA promotes building self-esteem and preventing bullying, yet, like Maria and Tomas, the program is so much more to so many others. Victoria Overbay of Winter Garden attests to that as well. Her middle son begged to join martial arts, yet, it’s her youngest son whose achievements bring tears to the eyes of a mother worried for his future.

Victoria’s son Micah, 9, lives with a diagnosis of alphabet soup. ADHD, ODD, SPD and autism spectrum disorder riddle the child. When the Overbay family began the program about a year and half ago, Micah’s verbal skills mimicked a pterodactyl, Victoria remembers. “He wouldn’t look at anyone and if spoken to, he’d curl his hands forward in front of his chest and make this sound that sounded like a pterodactyl.”

Micah’s victories started at the threshold of the school. Instructors require students to enter the building with a proud and audible “hello sir, hello ma’am” greeting. Holding expectations for everyone in a world where so many exceptions are made is rare.

Micah wouldn’t comply with the greeting until the day he asked Mr. Valecillos, “Why?” Without anger or reprimand, the instructor took his time to explain the importance of honoring self and honoring others. From there forward, Micah began his proper greetings.

As Micah’s confidence grew in class, Victoria made it a point to share that Micah still didn’t speak outside the walls of VMA. Unbelieving, Mr. Verneau took Micah outside and asked him a question. To his surprise, Micah reverted to his pterodactyl response. He brought him inside and repeated the question. Micah answered appropriately. So, the team started working with him inside and outside so that Micah would grow and be able to talk to others.

Micah is no longer defined by his alphabet soup diagnosis. He requested to join the leadership team and now often leads classes in warm ups and mentors lower-ranking belts in training. “Here comes my kid, who couldn’t talk in public, leading class,” Victoria says. “Although only the adult classes are asked to make long-term and short-term goals, Micah, on his own, created his.”

Proudly, she shares his first goal: “I want to look people in the eye when I talk to them, even though it makes me nervous.”

For the Overbays, VMA is a family affair. Classes have helped her husband get his blood sugar under control, and Victoria has lost weight. “The average kid may take 1.5 to two hours of classes a week,” she says. “Micah, on average, takes three to four classes, six days a week … because he wants to.”

Between helping others and participating in his classes, the child who once wouldn’t speak to anyone does anything he can to be in front of the class and to be seen.

VMA values show in Micah even outside the school. During a recent outing with friends from class, Victoria observed, “The black-belt child watching Micah and Micah looking out for a younger friend, and that one taking care of the littlest.”

Through the mentorship, encouragement and ardent expectations of instructors, Micah has been taught a life-long legacy: I’m older so I take care of the kid who is younger, so that we are all taken care of. “It’s scripturally sound,” Victoria says. “This really is our Taekwondo family.”

Maria offers this advice: If you’re doing martial arts, don’t quit before you reach your black belt. If your family member has special needs, get to know him or her as a person and do stuff together. He or she can do more than you think but needs to have the opportunity to do it and someone to believe in him or her.

For anyone considering martial arts, Taekwondo teaches discipline and values that can be applied to every aspect of life. It helps achieve a level of focus and determination that only comes after taking on this journey.

In a place full of aspiring ninjas, Micah and Tomas prove the old saying: Actions speak louder than words.